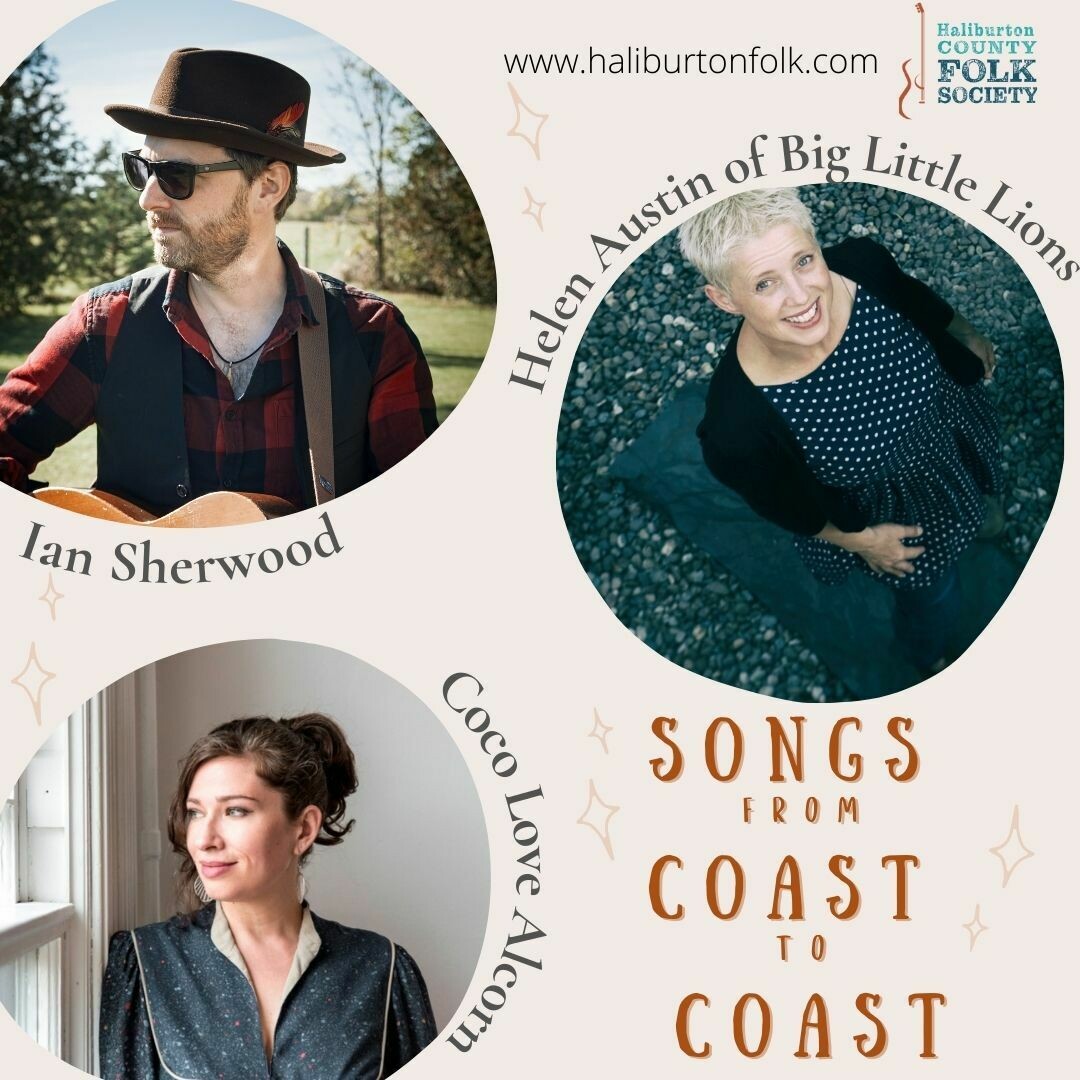 Join us at 7:00 pm EST on June 5 for this very special event. Ticket options: regular price - $15: pay a little less - $10; pay a little more - $25 to support these artists and a community of music. This concert is free if you renew or buy a membership to the Haliburton County Folk Society.

This is a Zoom event only. Once you buy a ticket or membership we will send you an email with the Zoom registration details.

JUNO Award winning singer songwriter, Helen Austin is no stranger to the stage and has worked as a professional performer for over 30 years. After her previous life as an award winning stand-up comedian, she brings her quirky humour to her musical performances, as well as the ability to tug at your heart strings with her more serious songs. Helen's main focus is the band, Big Little Lions which she formed with Cincinnati's Paul Otten. They have released several albums which have won a bunch of awards including Canadian Folk Music Award's Ensemble of the Year.

"Helen's words and notes are real in the way the best moments in life are real, and she is sincere in every phrase without losing one precious moment of quirkiness." - Indie Music Reviewer Magazine

"As always, Big Little Lions' Helen Austin and Paul Otten perform wonderfully in a live studio setting, playing off of one another as a collective, energetic tour de force." - PopMatters

The first thing you notice about Coco Love Alcorn, is the voice. It's a rich, dynamic, supremely soulful instrument – hailed by the press as extraordinary, beautiful, and stunning – that has a way of touching your heart and making you care. As a performer, Alcorn is always in the moment, joyful, and genuine. She combines diverse musical influences including jazz, R&B, pop, folk, and Gospel. Her playful and witty character, love of improvising, and willingness to engage fearlessly with the audience has made Alcorn an established presence on the Canadian music scene. Born in Antigonish, Nova Scotia and now based in Owen Sound, Ontario, Alcorn’s career has spanned more than 20 years, 12 (9 solo) albums, cross-Canada tours, collaborations, festival appearances, award nominations, and notable success in TV and film licensing. And it took someone with a spirit like Alcorn's to navigate this path.

"Throughout my career I have explored across many genres, collaborations and projects, taking a winding path to get to here,” she says. “But I’ve loved every step of my journey and trusted my inner curiosity to take me where it wanted to go.”

“ Coco is the ultimate musical spark plug... an electrical connector through which the creative energy flows. In my 30 years of touring around the world, I have never seen another performer able to bring people together like Coco does.” ~ James Keelaghan - Artist Director, Summerfolk and renowned Canadian singer/ songwriter

Ian Sherwood’s fifth studio album “Bring The Light”, produced by Daniel Ledwell, is filled with the same hooky cleverness that has endeared Sherwood to his audiences. This time, the deft work of Ledwell’s production brings Sherwood’s songs a new dimension of beauty and depth. Guitar, saxophone, huge songwriting and a voice that won him a 2013 Canadian Folk Music Award for Contemporary Singer, Ian Sherwood Brings The Light to every stage he stands on. A born story teller and a constant creator, his music dances the line between folk and pop. His live performances thrive on intimacy. Whether it’s a theatre show or large festival stage, his persona is irresistible and completely destroys fourth walls. When not touring the UK, US or all across Canada Sherwood produces for other artists as well as for theatre, film and television. He most recently won a 2017 Robert Merritt for Outstanding Original Score for the play “Tompkinsville”. He was named Best Male Artist of the Year by the 2012 International Acoustic Music Awards and was the 2008 and 2010 Music Nova Scotia Musician of the Year. Bob Mersereau of CBC Radio, Fredericton described him as “… a natural performer who entertains as much with his wit and stories as with his songs.”

“… impressive guitar work amid catchy hook lines galore, surely the main thought in the room was, “Yep. It’s only a matter of time before he’s a household name.”” -Todd MacLean, Charlottetown Guardian

“Despite starting out as a saxophonist, acoustic folk is Ian Sherwood’s forte and it’s something he does rather well.” -Americana-UK.com

“You know that Silk Soy Milk? The chocolate kind? That’s what his voice sounds like.” -Shaun Majumder, Comedian