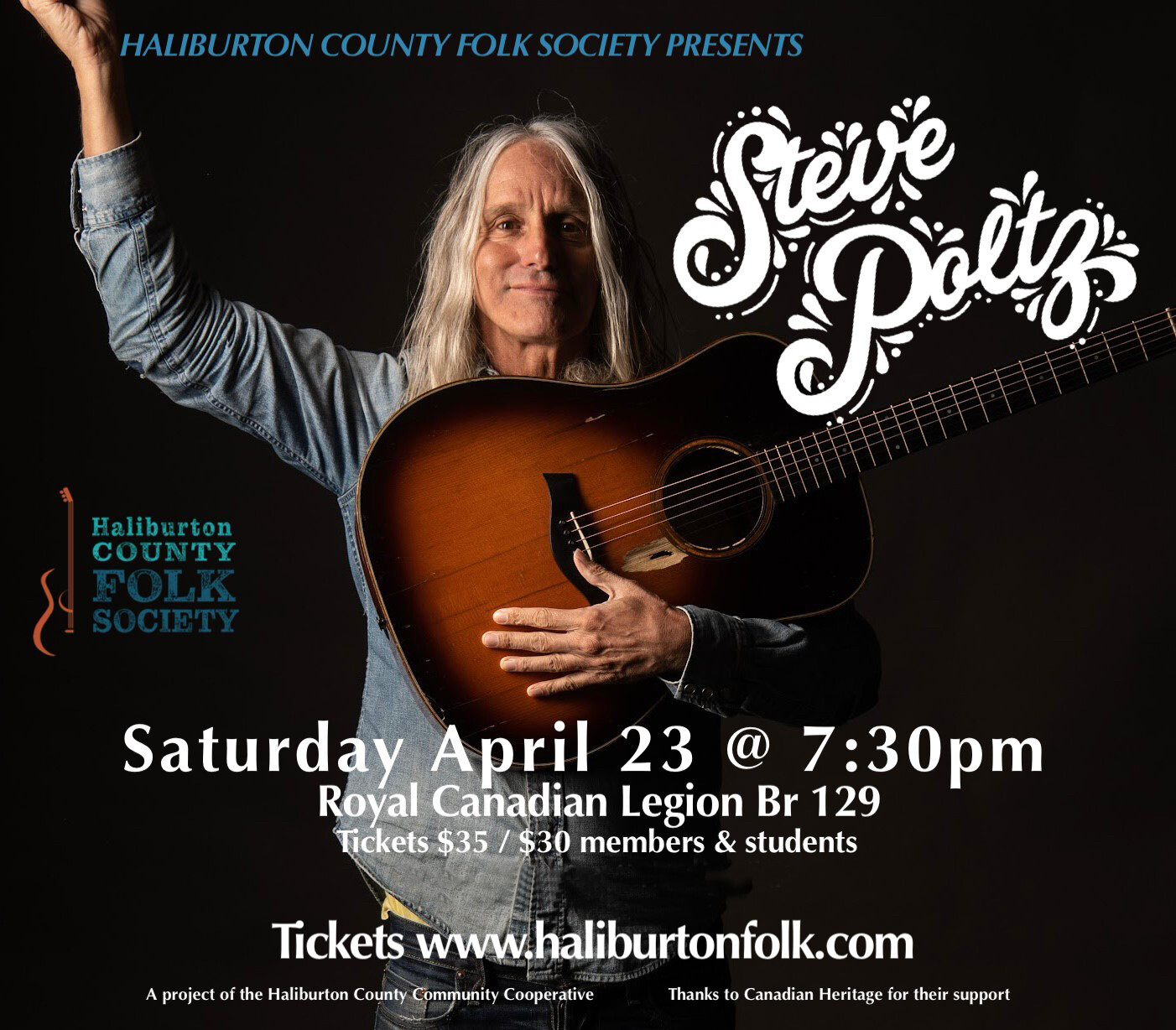 For the safety of all patrons, this concert will observe all protocols in effect at the time of the concert.

Refreshments: will be available for purchase from the Legion

Ticket options: Folk Society members and students - $30; non members - $35 (HST included). Ticket sales are limited. There are no physical tickets for this show. Please bring a digital or paper copy of your receipt to the show to ensure admission.

This is the story of Steve Poltz.

Some people start life with a plan. Not Steve. He opens himself up to the universe in a way most of us will never be loose enough to achieve, and the universe responds with a wink, a seemingly bottomless well of inspiration, and the talent to truly connect with an audience. While 2021 could have found him adrift, faced with a tour moratorium the likes of which he hadn’t experienced in decades, it opened a door — literally, his friend Oliver Wood of The Wood Brother’s door — to creating an exuberant, thoughtful batch of songs that celebrate life in all of its stages.

“I just make stuff up,” he exclaims, quipping, “it sounded good to say that.” Steve is the sort of prolific writer and collaborator who downplays what seems like a non-stop geyser of creativity. “I have no rhyme or reason for what I do. It’s all magic. I go by instinct. It just felt right, so I went with it.”

The “it” in question is one of those serendipitous situations that were created by the pandemic. Steve, a road dog and performance junkie who regularly spends 300+ days a year on the road, bringing it to the people, should’ve been on tour last year. Esteemed Nashville roots rockers The Wood Brothers (Chris Wood being a former neighbor to Steve), also should’ve been on tour. Stuck in Nashville, Steve often joined the Wood Brothers for outdoor socially distant hangs, and, on a whim, decided to record one song with Oliver Wood and Jano Rix.

They cut “Frenemy,” a wistful, “keep your friends close and your enemies even closer” song that made it clear to all involved that they’d stumbled onto something special. With no studio clock ticking, no schedule or deadlines to meet, the companionship and ability to collaborate with like-minded musicians added a joyful diversion to what was a boring-ass year. Musically, the sky was the limit, and the group of musicians and friends embarked on a musical experience that found cast and crew reaching toward the stratosphere with Stardust & Satellites, which Oliver and Jano Rix of The Wood Brothers produced.

The album begins with the lithe fingerpicking of “Wrong Town,” an anthem summing up the life of an itinerant songwriter/performer, where he declares, “The truth is I have no plan at all,” going on to cite Emmylou Harris and Don Was as his style icons. It’s a “pleased to meet me” sort of song, and it was written to greet the audience at the Telluride Bluegrass Festival in 2019. “I wanted to write an opening song,” Steve recalls.“I sat down with fellow Nashville songwriter Anthony da Costa, and ‘Wrong Town’ just appeared.”

But even gonzo guys have their moments where the cycle of life seems to be almost too much to bear. “Conveyor Belt” is a heartfelt song, a song that could only be written at a certain point in one’s life, and that point is when you’re saying goodbye to your parents and addressing your own mortality. Steve explains, "My mom passed away, and then a few years later my dad crossed over. I started thinking that I was next on the conveyor belt in a factory on the wheel of time. Next thing I know, I grabbed my guitar and this song appeared to me like a gift. It didn’t exist and then voila, there it was. I feel lucky to be a conduit."

The song is written over a gentle, repetitive melody that moves along with the inevitability of ye old sands of time. For fans, it’s a different side of Steve, using a voice and a new solemnity for a song that touches a universal nerve.

On one of the last nights of the recording sessions, Steve locked himself up in his writing room and within an hour, had conjured the catchy, effervescent “Can O’ Pop,” destined to be the radio single.

“Jano from The Wood Brothers was leaving the studio, and I asked him to give me a beat, and I told him I’d write a song with the beat he gave me,” recalls Steve. The exuberant, syncopated groove seems to bubble up as Steve admits, in his best mid-period Dylan, “I want to feel the fizzy rhythm with you.”

“Hey, Everyone loves a can of pop” he cracks.

Among other highlights, “It’s Baseball Season” seesaws on a sunny acoustic guitar as he pays homage to America’s favorite pastime. Poltz is a true fan, and the song’s laid-back, relaxed vibe speaks of carefree days at the ballpark. Steve even pays tribute to legendary baseball announcer Ernie Harwell.

With a cult following that includes fellow musicians, regular folks and festival goers who stumble onto his performances, there’s no common denominator to Steve’s fans. Born in Halifax, Nova Scotia and raised in San Diego, CA Steve toured and recorded with San Diego cult favorites The Rugburns (they still play annual sold-out reunion shows). But it was through his creative partnership with Jewel that he vaulted into the national spotlight; co-writing her multiplatinum Billboard Hot 100-busting smash, “You Were Meant For Me,” and continues to work with her to this day.

Over the years, the Nashville-based troubadour has built a fascinating solo catalog, earmarked by his debut, One Left Shoe, Dreamhouse, Folk Singer, and 2019’s Shine On. No Depression crowned him, "A sardonic provocateur with a lighthearted acoustic-driven wit, suggesting at times a sunnier, less psychedelic Todd Snider, or maybe a less wan, washed Jackson Brown,” while the Associated Press dubbed him "part busker, part Iggy Pop and part Robin Williams, a freewheeling folkie with a quick wit and big heart.”

He’s resumed his tour schedule, and when he comes to your town, he’ll say, as he does every night, “This is the best show I’ve ever played.” And hell, maybe it just is.

He’s something of a natural, after all.